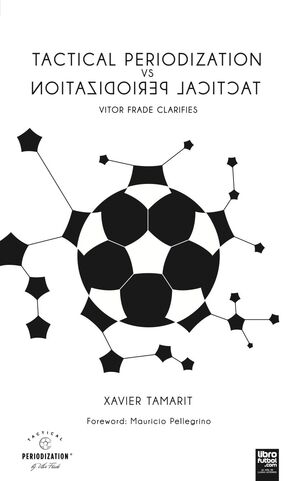 After the success of his first work, entitled What is Tactical Periodization?, Xavier Tamarit decides to immerse himself in the depth of this «revolutionary» football training methodology to try to offer answers to all the doubts that have been generated around it and to try be a lighthouse of true Tactical Periodization in the face of all those distorted versions that for various reasons have been appearing. For this he uses an unmissable interview with the creator of the methodology, Vítor Frade, that guides the book from beginning to end. The book is made up of two parts, A tailor-made suite and Tactical Periodization´s Big Bang, and is presented in a format that seeks to generate, from the first contact of the reader, the discomfort with the unusual and the feeling of dealing with an unconventional logic.

1. The Game Model as Previous Intention + the Methodological Principles.

> The Loop of the Game Model created within the Previous Intention, Operationalisation, and Reflection.

> The important of aesthetics in playing.

> The Methodological Principles that allow for the operationalisation of a way of playing (and that must be understood as a single Principle).

2. The way of playing: driver of the Process from the beginning of the season until its end.

> The beginning of the season: a concept that differs from the so-called pre-season and preparatory period.

> The first week: presentation of the Game Model (as Previous Intention) and the adaptation to effort that it requires.

> The Pattern Morphocycle: A Logic that allows for the adaptation and stabilisation.

> Goalkeeper training: A very special Sub-Specificity within the Specificity of the way of playing.

> Recovery: such an important topic in Tactical Periodization that requires yet another moment of reflection.

4. The abyssal zone of Tactical Periodization.

2. A Logic that allows for Specificity: macro, micro and of course, meso.

> The importance of the cappuccino strategy in the Process.

> Proprioception: a relationship between our body with our own body and our way of playing.

> Strength and Conditioning: blindfolding the muscles.

> The warm-up in Tactical Periodization.

3. Other sub-logics that set apart from logic.

> Individualised training versus a Maximized and Specific Individualization.

> Creativity: that fundamental aspect of life that allows us not to be mechanical and depends on the coachs intervention.

> The Strategic Dimension: a dimension that will always be submitted to a Tactical Supra-Dimension.

Holds a degree in Physical Activity and Sport Science from the University of Valencia (Spain, 2006). In 2012 completed the third level (UEFA PRO) of the Football Coaching Course.

He also attended the Sport Science and Physical Education Faculty of Porto University (Portugal, 2004-2005), studying in the Football Master's degree, with a specialisation in "Tactical Periodization" methodology.

Between 2006 and 2012 he had various roles at Valencia CF: Women's First Team Head Coach, Head of Academy Coaching, U-15 Assistant Manager (League champions), among others.